It is March 3rd, 1945. The war between America and Japan is raging in the Pacific Theatre. A young fighter pilot, James Huston, takes off from his aircraft carrier, U.S.S.  ‘Natoma Bay‘, in his FM2 Wildcat to attack Japanese strongholds on the island of Iwo Jima. It was to be his 50th and last mission before heading back home to the States on leave. Sadly, James Jr. would not live to enjoy his leave. Flying close to James’s doomed aircraft, three of his fellow airman, Jack Durham, John Provost and Bob Skelton, watch helplessly as an antiaircraft shell knocks the propeller off Huston’s plane and sets the plane’s nose on fire. Perhaps due to a jammed cockpit canopy, James is unable to escape and parachute from his doomed blazing plane which carries him down in a ball of fire to a watery grave close to the rocks at the entrance to Futami Ko Harbour.

Fifty five years after James Huston’s fatal crash, Andrea Leninger, mother of another James, is woken in the early hours of the morning in the leafy suburbs of Lafayette by the frantic screams of her two-year-old son as he kicks off his bedclothes trying to escape from an imaginary box. “Airplane crash on fire, little man can’t get out” he screams.

This was not the first and neither would it be the last of James’s regular plane crash nightmares. The boy’s nightmares started when he was just twenty-two months old after his father took him to the Cavanaugh Flight Museum in Dallas, Texas that features a large collection of World War II vintage aircraft. Still in nappies, the young boy ran excitably up to an aircraft and then walked around it carefully performing what looked to his father like a pre-flight check. Little James Leninger explored the exhibit for over three hours until his father dragged him protesting out of the museum. This was clearly not normal behaviour for a toddler.

Unsure how to help her son with his nightmare problem, Andrea sought the advice of her mother, Barbara Scoggin who had just finished reading Carol Bowman’s best seller ‘Children’s Past Lives.’ Barbara proposed the unwelcome suggestion that James might be experiencing a past-life memory. James’s father, Bruce Leninger, a devout, conservative evangelical Christian was initially violently opposed to what was to him a heretical suggestion. One life – one everlasting soul- was Bruce’s credo. Bruce’s belief system was shaken to the core as they came to know their little boy harboured the soul of a man who died over half a century ago. The Leningers even contemplated arranging an exorcism session for their son. Wanting to solve the nightmare mystery, Bruce began to question his son about his dreams, why he spent so much time playing with model aircraft and drawing pictures of plane crashes. 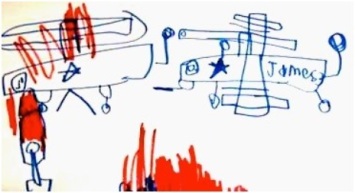 One day, Andrea pointed out what she thought was a bomb under a plane that her son had identified as a Corsair. “That’s not a bomb, Mummy. That’s a dwop tank,” came her son’s indignant response. Talking about this with her husband later, she learned that a drop tank is an extra fuel tank fitted under an aircraft to extend its range.

The Characteristics of a Corsair

The furniture in their new home some became dented with James landing his model planes on the deck of an imaginary aircraft carrier. Bruce asked his son if he remembered the name of his carrier. James immediately replied that he flew his plane from a ship named the ‘Natoma’. Other dents were due to James crashing his model aircraft onto the wood after knocking off their propellers. His mother asked her son who had shot his plane down – he relied in exasperation “the Japanese of course.”  When his mother asked him how he knew, James replied: “the big red sun” referring to the Japanese war-time flag. James went on to explain that the plane caught fire when it was hit at the front of the engine. That perhaps explained why, even as a toddler, James was always checking fire extinguishers around the house.

Another of James’s mother early questions was why had he named three of his G.I. Joe James dolls Leon, Walter and Billie. “Because they were with me on the Natoma”, came the boy’s immediate reply.  When describing his dreams, James often mentioned the name of one of these friends, Jack Larsen, who was also a pilot. He also remembered that the type of plane they flew was a Corsair and added the surprising detail that the plane had a tendency to veer left on takeoff and burst tyres on landing.  At a Natoma Bay Reunion that Bruce Leninger attended, Lt. Bob Greenwald, one of James Huston’s Wingmen, confirmed that the Corsair did indeed have both these idiosyncrasies. Bruce also learned at the reunion that the pilots that flew from the carrier referred to their ship, as his son did, by the shorter name ‘The Natoma’ and not the ‘Natoma Bay’.

Intrigued by his son’s obsession with vintage aircraft, his father bought a book on aircraft carriers that operated in the Pacific during World War II. While he was leafing through the black and white pictures, James jumped up on his lap and when the pages turned to the Battle of Iwo Jima, James pointed to a map and told his father that was where his plane was shot down and crashed near the rocks at the entrance of the Futami Ko Harbour.

Now, armed with a significant number of his son’s reputed factual memories, Bruce Leninger decided it was time to do some serious research to disprove his mother-in-law’s reincarnation hypothesis. He was highly sceptical until, in the early stages of his search, he discovered that an aircraft carrier named the ‘Natoma Bay’ had indeed participated in the invasion of Iowa Jima. Also amazingly, Bruce learned that Jack Larsen was a fighter pilot who flew off the Natoma. After further research in obscure reference sources, and attending two Natoma Bay Reunions, Bruce discovered one important discrepancy in his son’s apparent wartime memories – the original James crashed and died while flying a FM 2 Wildcat and not a Corsair.  Later research would explain this discrepancy.

Once, while the family was watching a History Channel program on World War II in which Corsairs were filmed shooting down Japanese planes, the narrator referred to the downed enemy planes as Zeros. Little James was quick to correct the narrator and insist that the Japanese planes were Zeros, not Tonys. When his parents asked James about the difference between the two types of Japanese fighter planes, James explained that Tonys were smaller than Zero. On checking with experts, Bruce learned that James was correct.

During his archive searches, Bruce learned that James Larson’s father was James Jr. – that was perhaps why his son insisted on signing his drawings as James 3. On questioning why he called himself James 3, his son replied that I am the third James in my family.

The Physical Resemblance of James Leninger to James Huston.

Side-by-side photographs as children and adults confirm the remarkable resemblance of James Leninger to James Hudson. The literature suggests that this is a common feature: reincarnates apparently often resemble their appearance in an earlier life.

Both James’s were also described as having excellent singing voices – a gift not shared by either Bruce or Andrea Leininger. Perhaps the gift of singing had been carried over from one incarnation to another.

Further convincing evidence was to come from a search by Andrea Leininger in census records for surviving members of James Huston Jr.’s family. She discovered that a surviving sister, Anne Huston Barron, now 84 years old, was living in Los Gatos, California.  Andrea set up a phone call between Anne and little James in which her son, unprompted, revealed many of the personal details of James Huston’s life and family including the following:

By the end of the conversation, an amazed Anne commented that she had to accept that James Leninger was the reincarnation of her deceased brother James Huston Jr.  In all, she was able to validate over fifty of James’ memories. She commented, “The child was so convincing coming up with all the things there is no way in the world he could know.”

A bemused Anne ended the telephone conversation by promising to send James Leninger some of James Huston Jr.’s memorabilia she had kept for over sixty years in the attic.

When the promised package arrived, it contained a photograph that explained the only discrepancy in James’s testimony about his former life. There, standing in front of the characteristic gull-wing of the Corsair, was a smiling Lt. James Huston.  Bruce later learned from another pilot, Bob Greenwald, that James Huston was one of the elite pilots who had been enlisted into a program to determine whether Corsairs could fly off aircraft carriers.  This information proved that the original James had indeed spent many hours flying Corsairs before transferring over to Wildcats flying off the ‘Natoma’.

Although sceptics seized on the discrepancy of aircraft type, I believe that, on the contrary, this memory confusion helps to prove the story’s authenticity. If, as some sceptics suggest, the entire story is a fraudulent charade in which the participants where schooled to repeat researched archive information, the perpetrators would certainly have ‘got their facts straight’ from the beginning.  James confused lapse of memory has the ring of truth. I for one, can remember many occasions when I have mixed up names and places when recalling events from my childhood. How much more likely is this to happen when remembering facts from another life?

The package contained two other interesting items. The box containing a model of a Corsair still smelt strongly of diesel fuel.  James commented that it smelt just like an aircraft carrier.  The World War II Vets that James’ father met at Naoma Bay reunions confirmed many parts of the carrier did indeed smell of diesel fuel, sweat and cigarettes. The young James also pulled out a photograph of portrait of James Huston and asked “where’s the other picture?” Anne Barron confirmed that there were indeed two pictures: her mother had two matching portraits done by the same artist as a present for her two younger children which Anne had stored in her attic for sixty years. James even correctly remembered that the artist’s name was Daryl.

After exchanging numerous telephone calls, James parents arranged for him to meet his reputed sister from his former life in person. 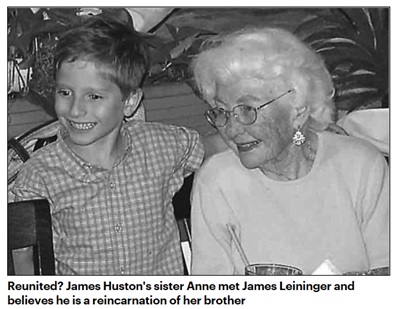 As well as Anne Huston Barron. the weight of evidence he had uncovered forced Bruce Leninger to change his former views as an evangelical Christian and accept reincarnation as a reality.

Whatever the truth behind James Leninger’s reincarnation story, his nightmares continued in a milder form until he was eight-years old. His later nightmares were gentler than his early terrors causing him to wake up sobbing softly. Now, as an adult, he sleeps soundly, his nightmare memories of his possible earlier life a thing of the past.

Quote 1:  “I Still don’t believe in Reincarnation, but there is no reasonable explanation for the story.   – kid still in diapers – sucking a bottle – how could he be coached to know the flight characteristics of a WW2 fighter plan  –  just beginning to string sentences together.”

Quote 2: “I don’t believe in reincarnation.  I hardly believe in carnation.  I am a secular, rationalist sceptic. But I have no reasonable explanation for James Leininger/Huston story.

Click this link to return to the Menu and the Home Page.